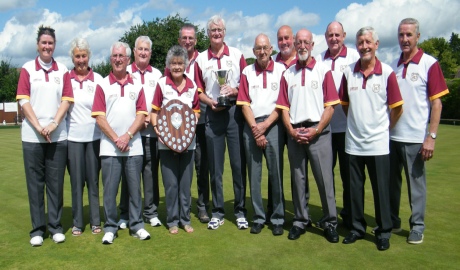 1. It shall be under the control of the Norfolk County Bowls Association (N.C.B.A.).

2. All clubs participating in the league must be affiliated to the County Association. Female players may play if they are affiliated through the Norfolk Women’s Bowls Association or if Associate Membership is paid at the approved rate to the N.C.B.A. by their club. Associate members names must be supplied to the N.C.B.A. Secretary or League Controller who will share the information.

3. All games to be played to E.B.F Rink Play Rules except where they are amended by League rules.

4. The League Controller, Press Officer, Divisional Representatives and 3 people to represent the League on the County Executive shall be open for re-election and appointed annually at the League Annual General Meeting

5. The League Committee shall be made up of: - The League Controller, Elected Divisional Representatives, and two persons appointed by the controlling County Association.

6. The Committee shall have the responsibility to: - make fixtures, administer the league and to settle any disputes that may arise. Their decision is final.

7. All fees and charges to be set by the County Finance Committee.

8. All monies shall be the property of the Norfolk County Bowls Association.

10. Voting at the AGM or Extraordinary AGM shall be allowed on the basis of one vote per team and one vote for the League Controller and two representatives from the County. If a club has more than one team in the League there must be a person present for each team from that club in order for the votes to be cast.

1. The league shall consist of 4 Area Divisions and Sub Areas. The number of Sub Areas to suite the number of entries.

2. No Area or Sub Areas shall consist of less than 5 teams.

3. Area Divisions to consist of no more than 8 teams.

4. Sub Areas to consist of no more than 8 teams.

5. It is the responsibility of the committee to divide the teams into Areas and Sub Areas.

6. The 4 winners of the Areas will go forward to a playoff semi-final and then to play the final on the same day.

7. The playoffs will take place on a weekend in August (Saturday or Sunday) on a neutral green from the 4 semi-final teams. The draw will take place at the A.G.M. in January.

8. The overall winners will receive the Heddy Blythe Trophy.

10. The bottom 2 teams in the Area Divisions could be relegated to the Sub Areas.

11. The Top team in each of the Sub Areas will be promoted to the Area Divisions.

12. Teams in the Sub Areas with the highest average points could be promoted to fill the vacant spaces in the Area Divisions. Except in exceptional circumstances when the league committee can make adjustments to balance up the divisions within the County.

13. If any team withdraws from the league before the season starts the committee can readjust the Areas and Sub Areas,

1. Any member club must be able to furnish a green at least 30 metres in length which must be ditched and either banked or step boarded. Markers must be placed 2 metres from the ditch and to show the 23 metre points.

2. It is the responsibility of the Committee to ensure these conditions apply.

1. Each team shall consist of 9 players, divided into three rinks, each playing 3 bowls.

2. Team membership shall be open to all County affiliated members within that club .

3. A club may enter more than one team.

4. No player may play for more than one team or club per season. Any team found using a player in breach of this rule will be penalised. The team or club responsible for playing the player will lose 9 points from their seasons tally of points,

a. Grey trousers or

b. Grey shorts supplied by a bowls retailer with either no logo other than a maker’s name or with the official EBF logo,

c. White tops, or coloured shirts where registered with the county, all players must be similarly dressed.

Any player not so dressed cannot take part in the game.

Clubs have a right to prohibit shorts being worn on their green but must notify the League Controller.

7. If a club has 2 or more teams in one Division their fixtures must be completed in the first two weeks of each half of the season

1. Games shall be played on Tuesday nights except where they have to be re-arranged due to postponement or where a Sub Area has 9 teams.

2. All league games in the Areas to be played by the first Tuesday in August with the exception of Sub Area games which are to be completed by the second Tuesday in August. The last games may be extended at the League Controllers discretion taking into account weather conditions and any other relevant factors.

4. Each team shall play other teams in their Division, Home and Away.

5. All games to commence at 6.45pm except from the 1st August when 6.30pm applies. Fifteen minutes will be allowed for late arrival. No player may take part after this waiting time no matter the reason.

6. A team with less than 6 players will concede the game. The team being given the match will receive 9 points the team conceding the game will have 9 points deducted from their league points total.

7. A team that concedes more than one game in a season will be withdrawn from the League.

10. If a game is not completed or is postponed due to inclement weather, a new date for the game must be re-arranged within 6 days. The home team must give two dates, one of which must be accepted by the away team or the game conceded. The League Controller must be advised by telephone of all postponed games and the new date the game will be played.

11. Games may be postponed in exceptional unexpected circumstances following agreement with the League Controller and provided the opposing team are advised at least 48 hours before the game.

12. The Home team will be responsible for postponing a game in the event of inclement weather. The decision will be based on the green being fit for play, the decision being made no earlier than 4.30pm, and the safety of players. Rain on its own is not sufficient reason to postpone a game.

13. The mat after the first live end may be moved up the green so long as a 23 metre cast can be attained.

15. Results of games to be sent on result cards provided, signed by both teams and posted to the League Controller within 24 hours of the game by either 1st Class Post or by email provided the result card can be scanned and sent with the email.